Easy walk along the river, through parks and quiet streets without heavy traffic. Suitable for families with children.

Highlights of the Walk 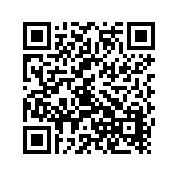 Start at the Hotel Pav, head south on Křemencova toward Myslíkova, after 150 m turn right onto Myslíkova and go down to the Vltava river. 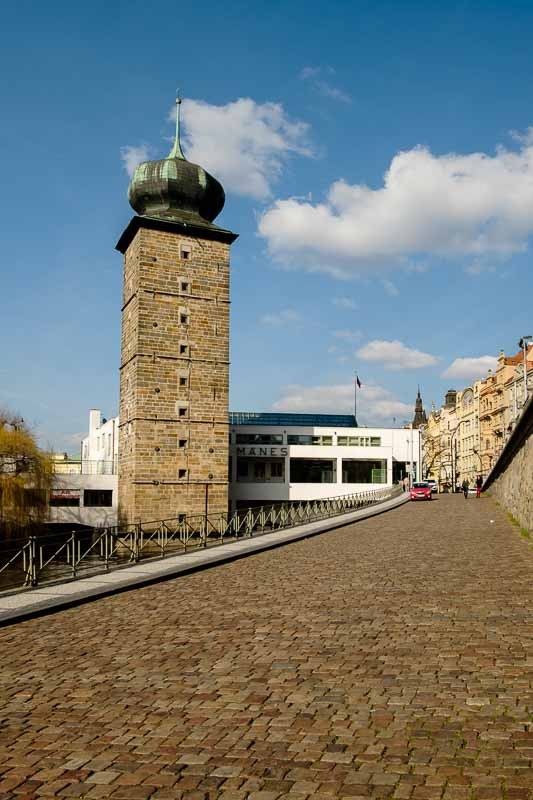 A complex with a restaurant, club, and exhibition hall built between 1928 and 1930 by the Manes Association of Fine Artists. Notice the unique combination of the old mill tower in renaissance style with modern functionalist design by Czech architect Otakar Novotný.

Turn left onto Masarykovo nábř. and after 10 m turn righ onto Naplavka (a lower embankment right along the Vltava River). In front of a bridge turn left and take stairs up to view the Dancing house. 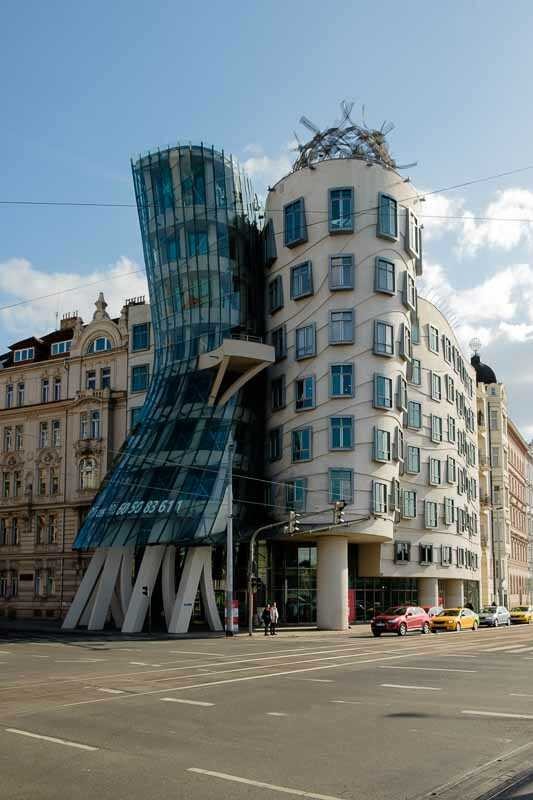 Dancing house or Fred and Ginger

One of the most outstanding example of Prague’s contemporary architecture. Designed by Croatian-Czech architect Vlado Milunić in cooperation with Canadian-American architect Frank Gehry and 1996. 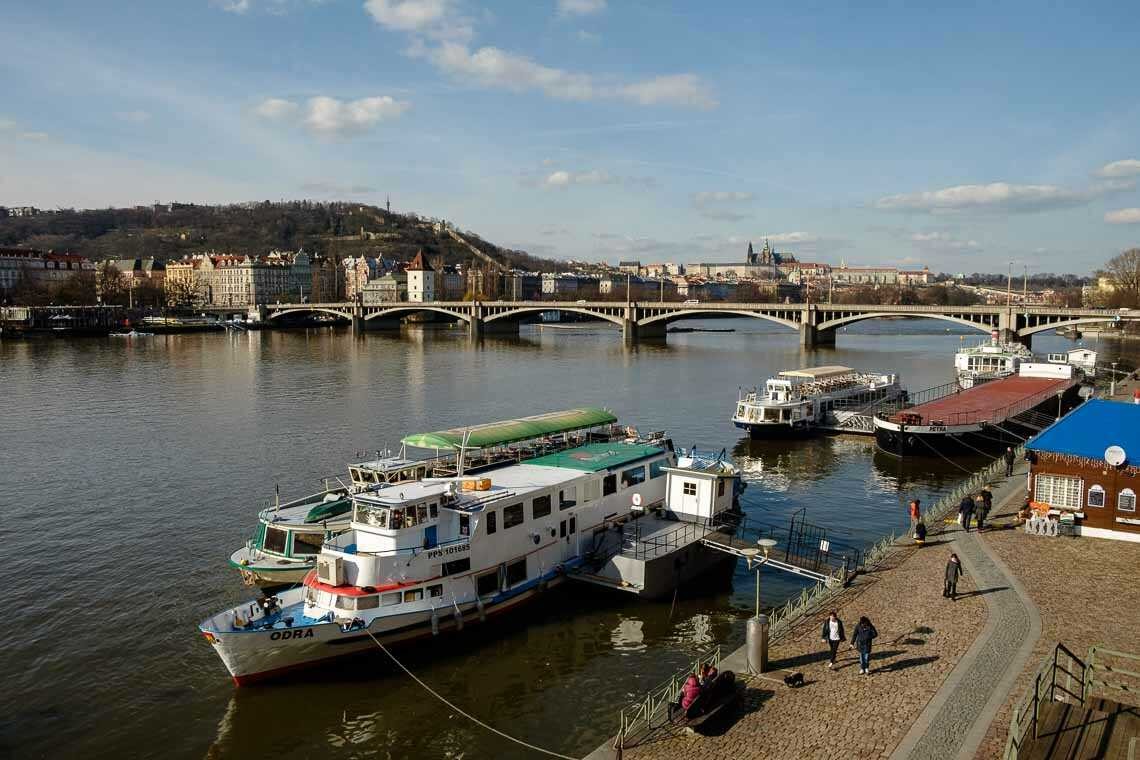 Náplavka below the Dancing House

After observing the Dancing house, take the same stairs down back to Náplavka, turn left and follow Náplavka towards next bridge. Before you reach the bridge, take another stairs up and head straight to Palackého square (tram crossroad). 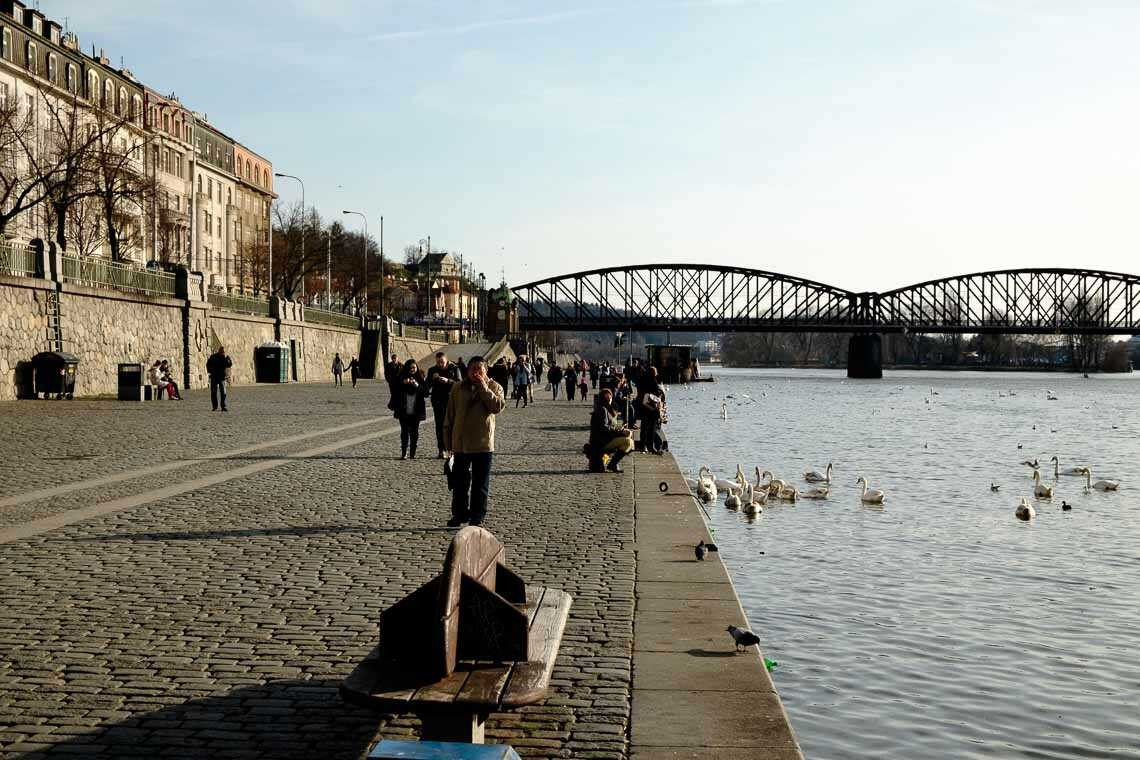 Náplavka at the railway bridge

Palackého Square and the Emmaus Monastery

You are looking at another unique combination of the old and modern architecture, the Emmaus monastery. It’s an abbey established in 1347 and built in the Gothic style. During WW II it was damaged by bombing and its modern steeples shaped as an angel’s wings were added in the 1960s. You will have an opportunity to visit the interior of the monastery in the later part of the walk. 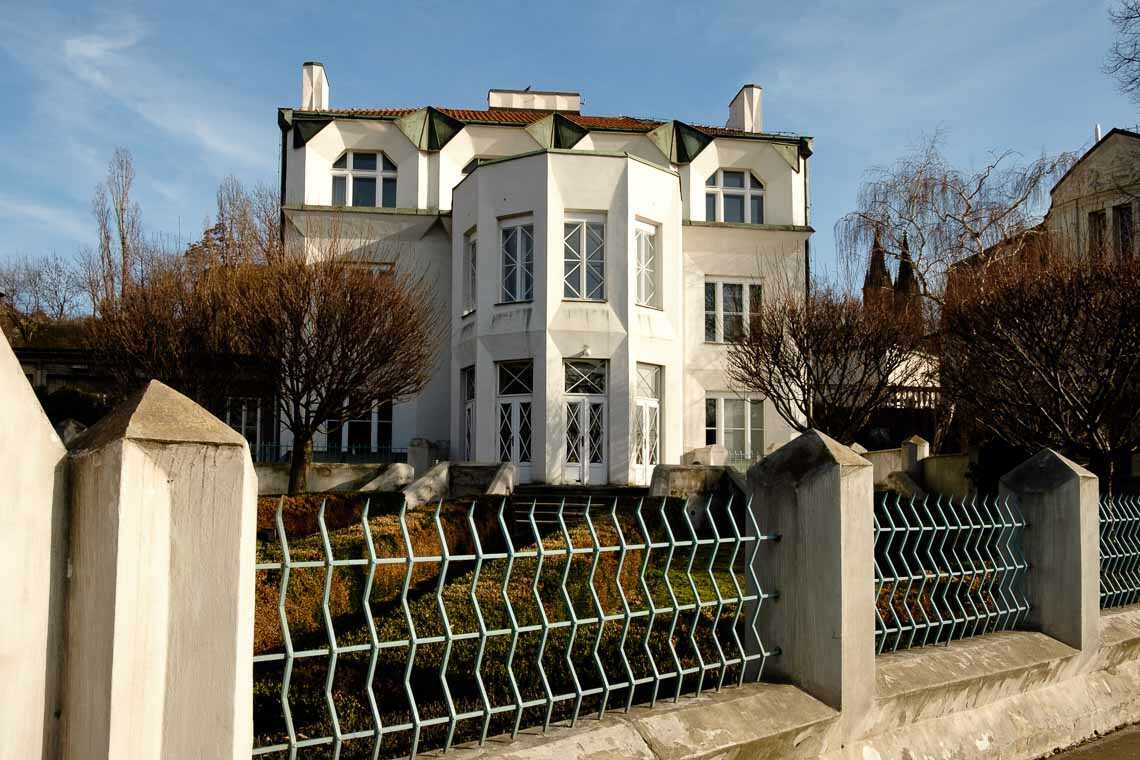 The first example of the Czech Cubism in architecture on our route. Villa Kovarovic is a luxury private home designed by Czech architect Josef Chochol in 1912–13. Notice how its facade as well as the details of the garden, fence and the garden gate resembles the artworks of Braque or Picasso.

Another excellent work of Josef Chochol is the Cubism Family Triplex, a family house designed in 1912–13 and located on the river embankment 250 m north of the Villa Kovařovic. 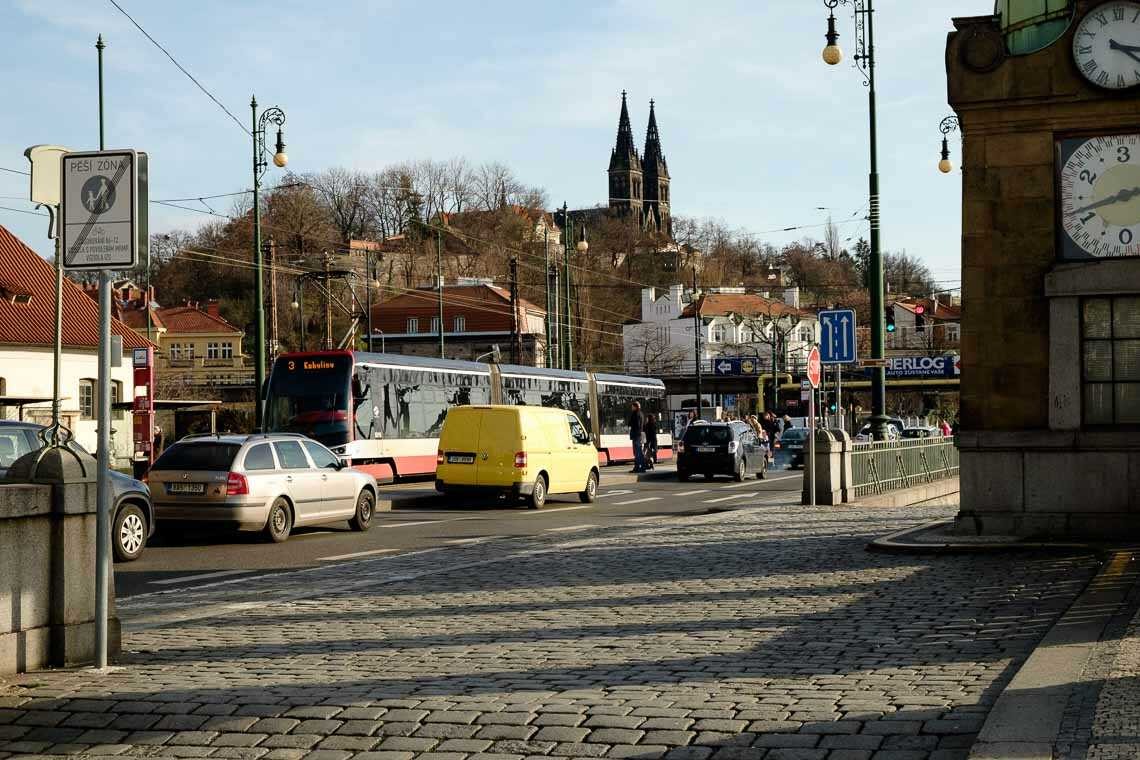 Behind Villa Kovařovic take a crosswalk across Libušina street and head to a small path between two houses. Follow the path uphill towards the Vyšehrad Castle. 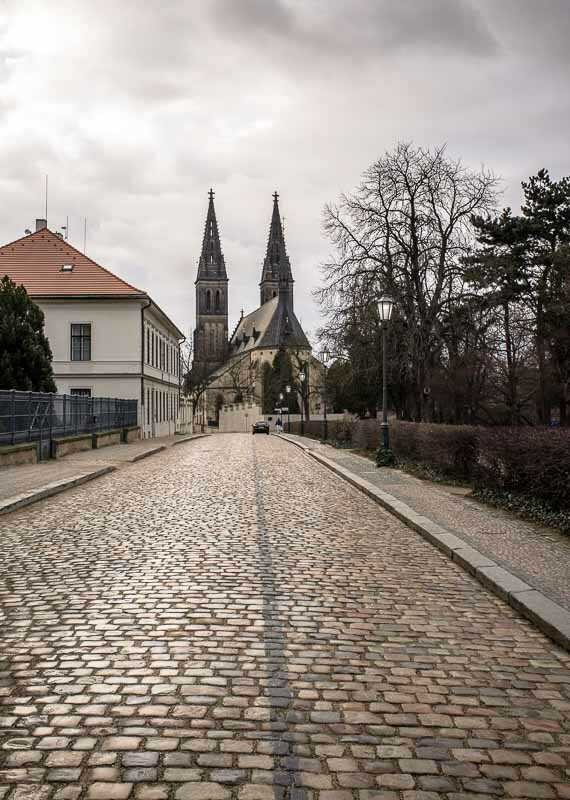 Vyšehrad is the 2nd castle above Prague and it was a temporary seat of Czech princes in 11th century. Formerly gothic castle was rebuild as a fortress in Baroque style in the 17th century. Now it is mainly a public park, popular among both Prague citizens and foreign tourists.

Walk freely through the park, have a short rest, but don’t miss the large Church of St. Peter and Paul, which originates from 11th century, but its current appearance is Neo-gothic, and the Romanesque rotunda of St. Martin dates from the second half of the 11th century.

In warm weather we definitely recommend the garden pub Na Hradbách (On the Walls), which offers good beer and great outlook back on the New Town.

After a beer or two follow the route down through the Cihelná brána (Brick gate), an Empire-style structure dating from 1841. 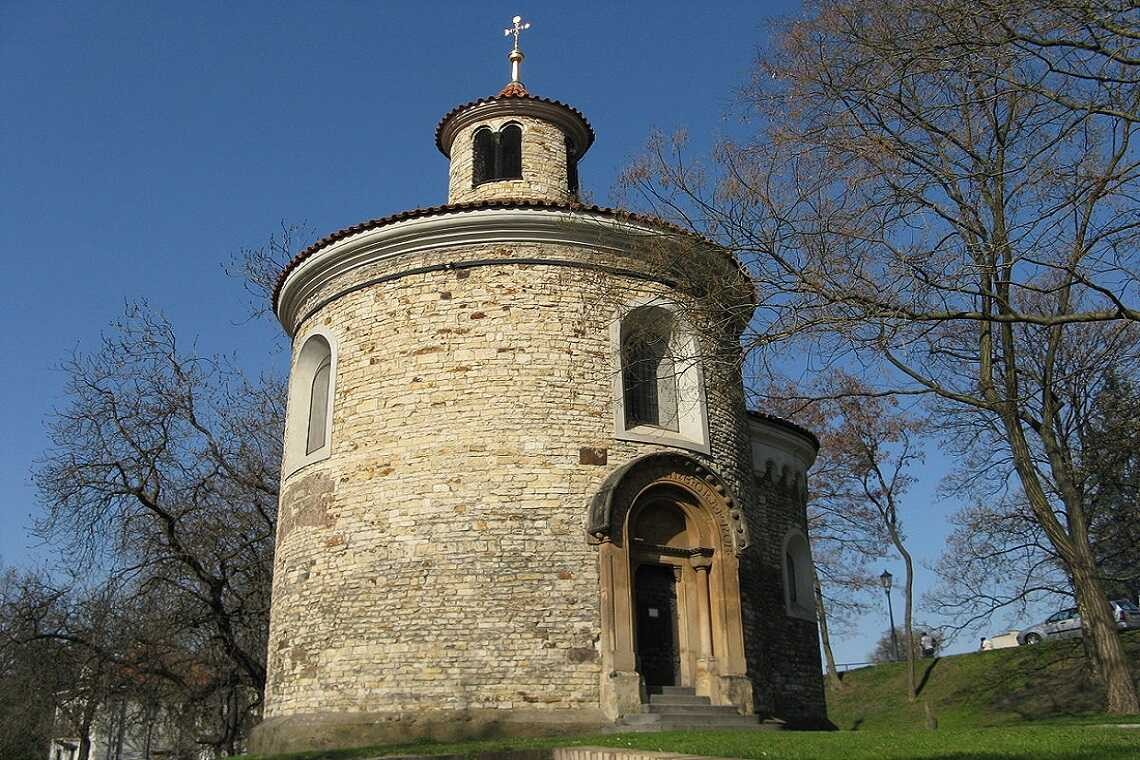 Going down from the Brick Gate take the first turn right to Přemyslova street. The last house on the left is the Apartment House Hodek. 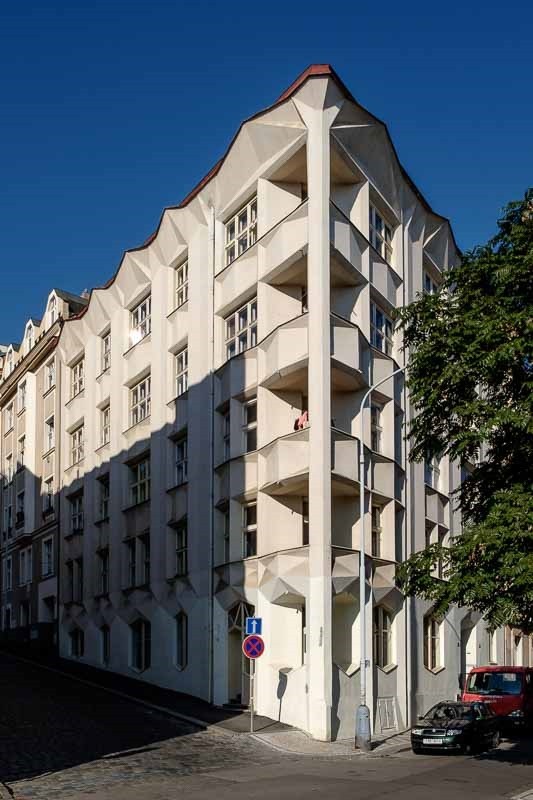 A corner apartment house designed in Cubist style by Josef Chochol in 1911.

Cross Neklanova and Vnislavova. If you are already tired, take a shortcut and turn left onto Na Slupi street. Otherwise follow the route uphill to Karlov via Horská street.

Once you cross Na Slupi street, you will enter a quiet quarter of academic and scientific institutions called Albertov. Head stright, until the street changes into stairway along the old, middle-age Prague fortification towards the Church of the Assumption of the Virgin Mary and St. Charles the Great. For a while you won’t believe you are still in modern city. 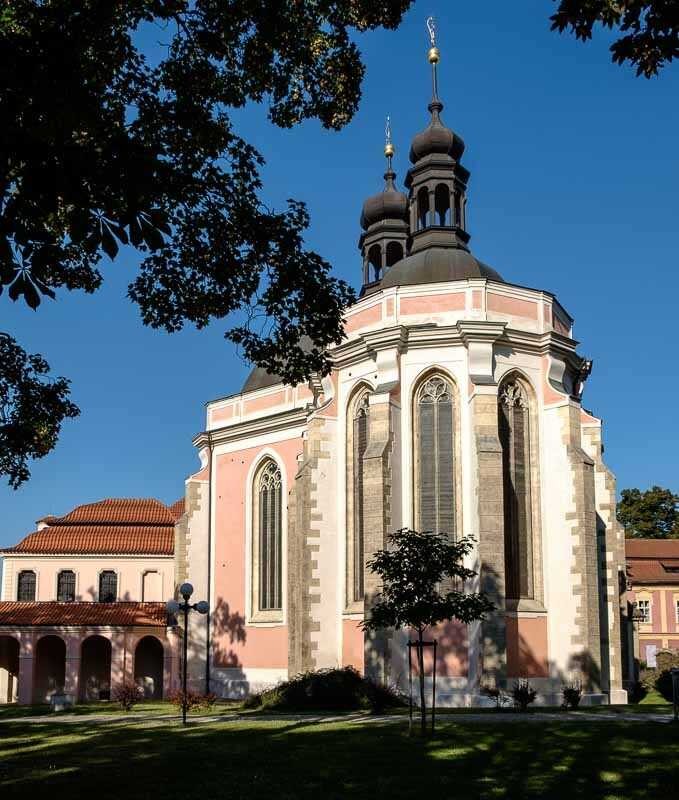 Church of the Assumption of the Virgin Mary and St. Charles the Great

Church of the Assumption of the Virgin Mary and St. Charles the Great

Established in 1350 by the Czech king and Holy Roman emperor Charles IV. as on of the churches of the newly founded New Town of Prague. The church is open only on Sundays between 2:30 to 4:30 PM, entrance is free of charge.

From the church follow the route back and don’t miss two outlook spots: 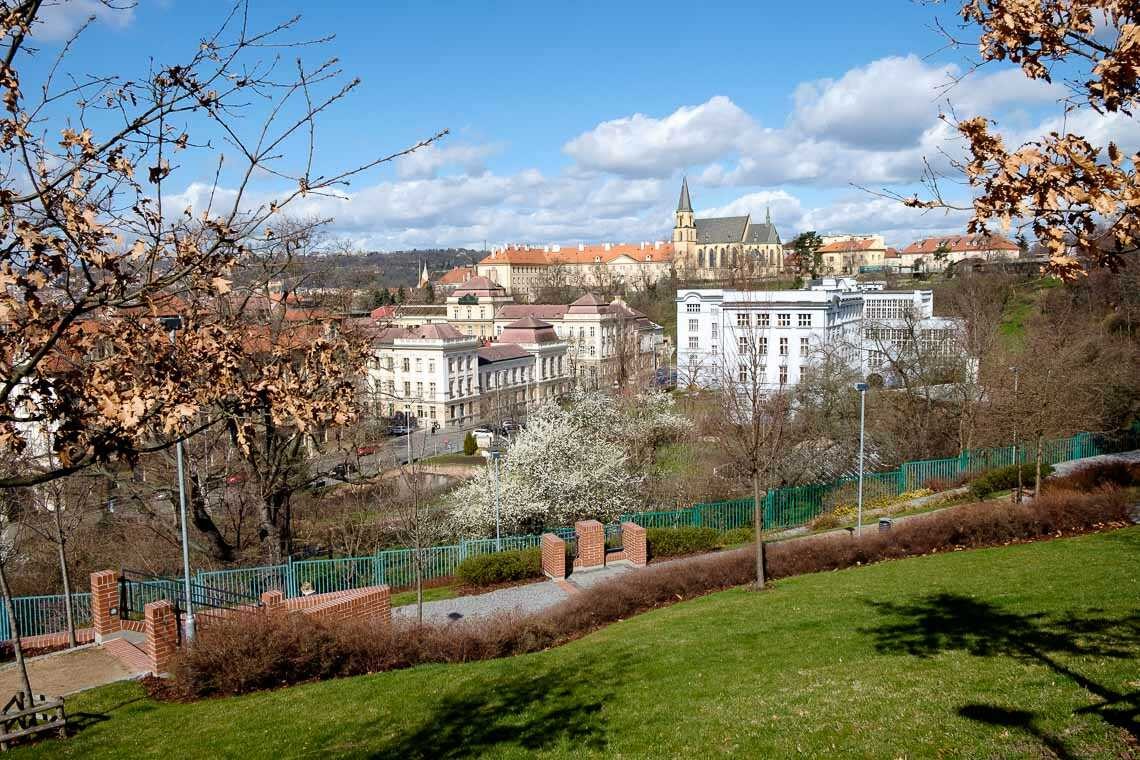 After a short rest in the Ztracenka Garden, head back and at the lower end of the stairs turn right and left onto another short stairs leading down to Studničkova street. Go to its very end, where yet another stairs leads up to St. Apollinaris Church.

Another church founded by the Czech king and Holy Roman emperor Charles IV. in the New Town of Prague in 14th century.

At St. Apollinaris Church turn left to Apolinářská street and head down to Na Slupi street. Turn right onto Na Slupi and continue about 100 m. Entrance of Botanical garden is on the right.

Prague Botanical Garden of the Charles University is the oldest botanical garden in the Czech Republic dated from 1898. Due to it´s limited area, it was replaced by a large and modern botanical garden in Troja in the end of the 20th century. However, the garden is still a beautiful and quiet place for a short walk and rest.

From the Botanical Garden follow Vyšehradská street up and after 200 m turn left to Emmaus Monastery (Na Slovanech). 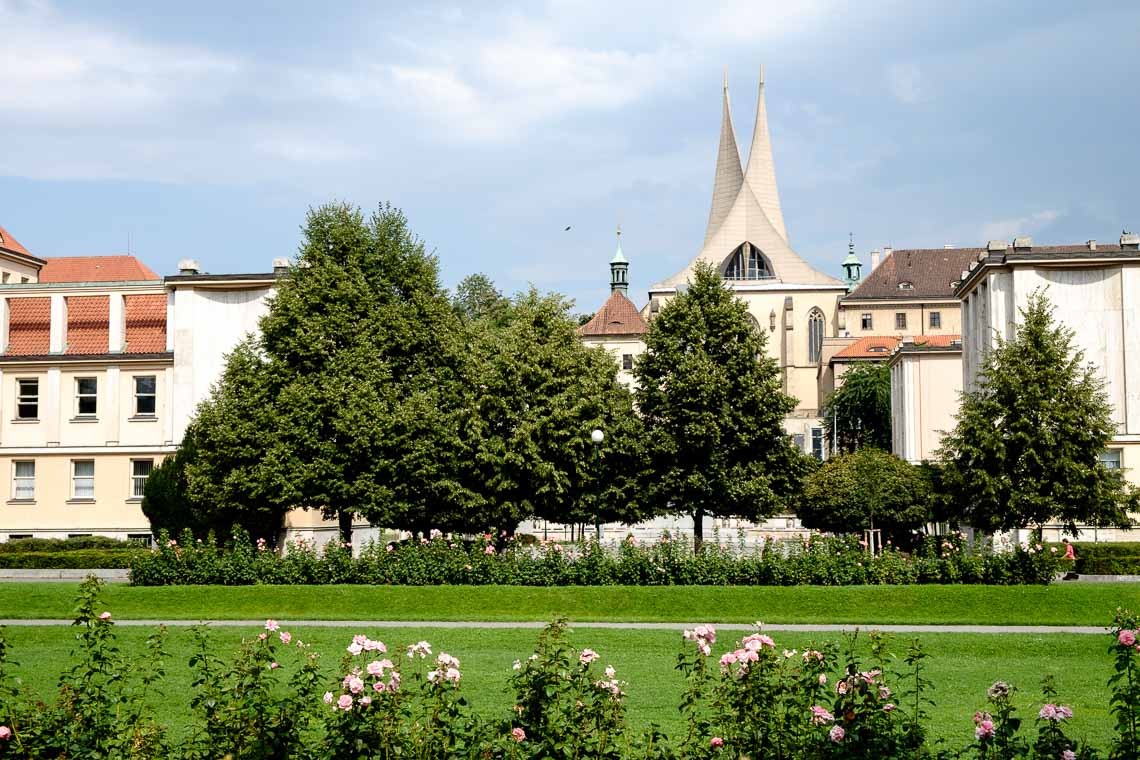 Now you came close to the Emmaus Monastery, which you could see from the river embankment in the beginning of our walk, and can visit its interior. It is open to public for 50 CZK in work days between 11 AM and 5 PM. Opening hours in winter end in 2 PM. 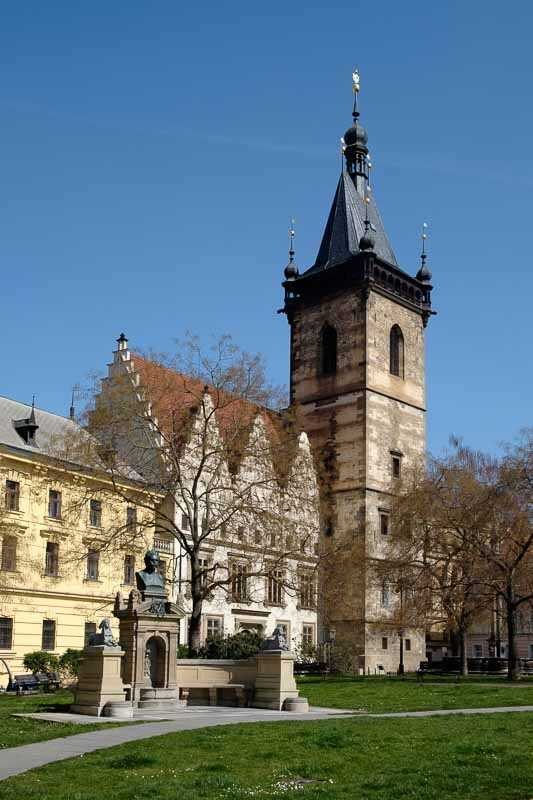 Established in 1377 by the Czech king and Holy Roman emperor Charles IV. as the Town Hall of the newly founded New Town of Prague (1348). Formerly gothic building was reconstructed in renaissance style during the 16th century. The tower is 70 m high with 221 stairs. The tower was used as a prison. The last prisoner was Mrs. Milada Horáková, a politician executed by communist regime in the middle of the 20th century. In 1419 it was the place of the first defenestration of Prague.

TIP: Have a small snack at Café Neustadt in the courtyard of the New Town Hall. Entrance is around the corner from Vodičkova street.

Go down along the New Town Hall, turn right to Spálená street and follow the street. Take a crosswalk to the House Diamant. 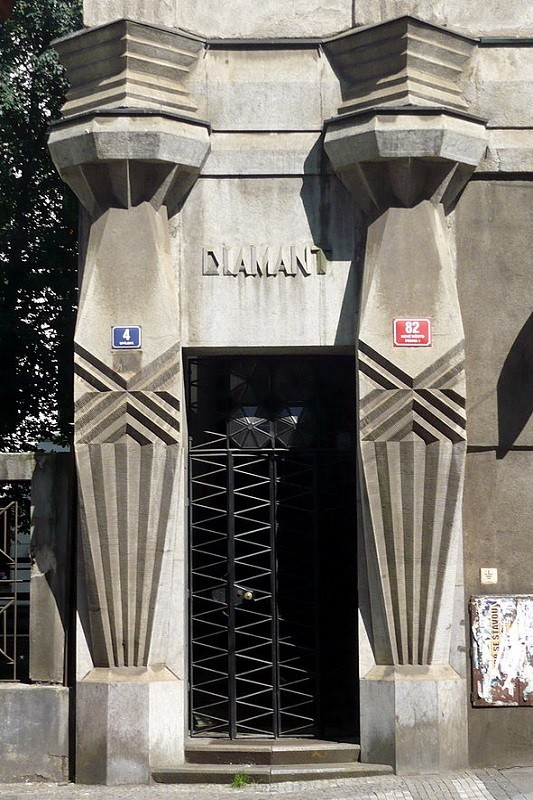 A corner apartment house built in Cubist style between 1912 - 1913. Cubist interiors are preserved in the house (chandeliers, doors or handrails). Notice the cubist arch above the baroque statue of St. John of Nepomuk placed between the house Diamant and the baroque Holy Trinity Church.

The shortest way to the hotel Páv is through a passage opposite the house Diamant in Spálená street 15. Pass through the passage, turn left to Opatovická street and then second to the left to Křemencova street. The hotel Páv will be on your right.

This site uses cookies to help you find out how the site is used. In order to use cookies, you must first enable us.